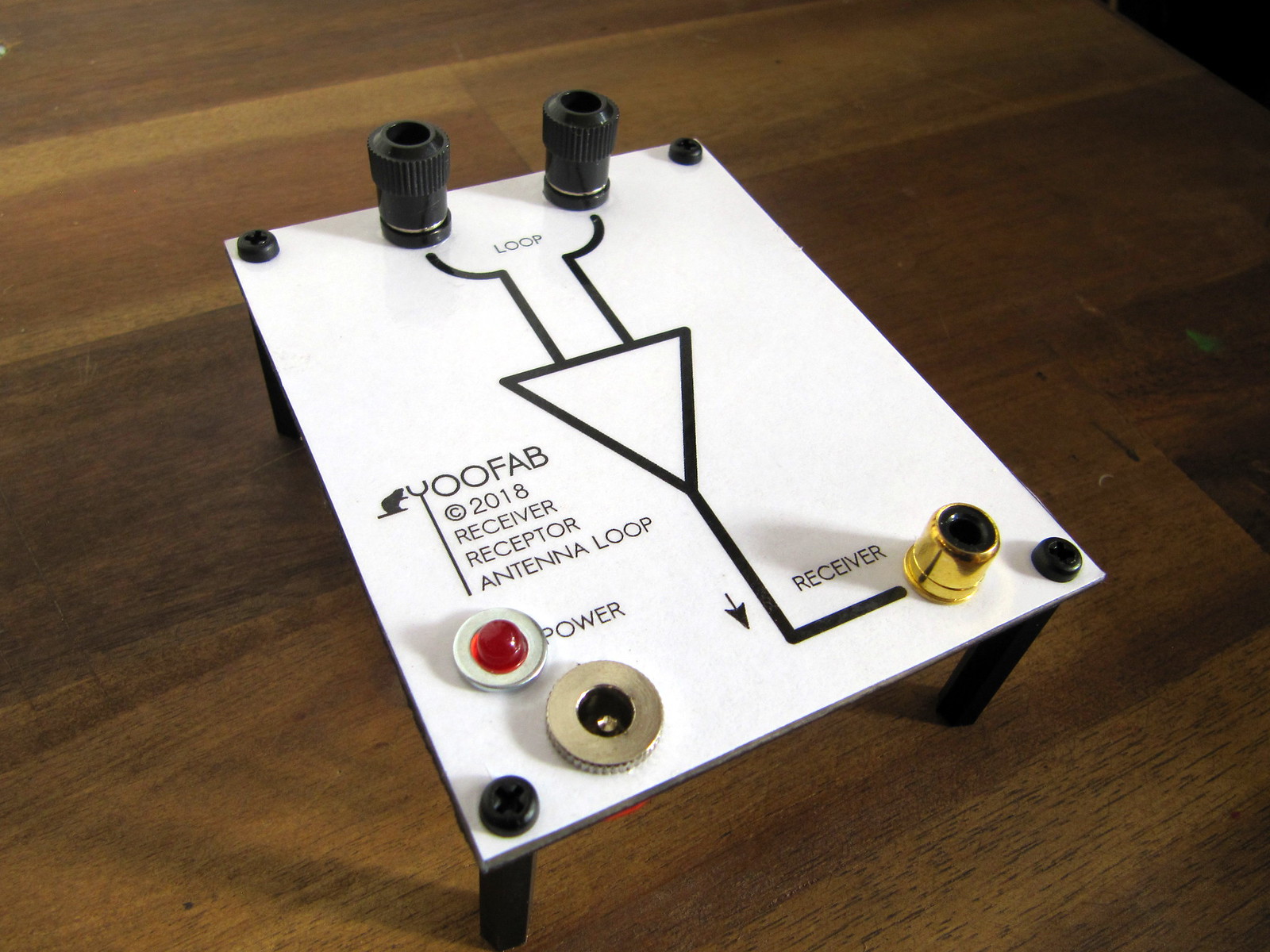 The RFLEGO Active Antenna Receiving Loop Kit, once correctly built, will provide a highly sensitive HF Antenna that should operate more in the magnetic domain than it does in the electrical domain. It should be effective across the whole HF spectrum.

WARNING: DO NOT USE THIS ANTENNA TO TRANSMIT. This is strictly a receive only antenna. 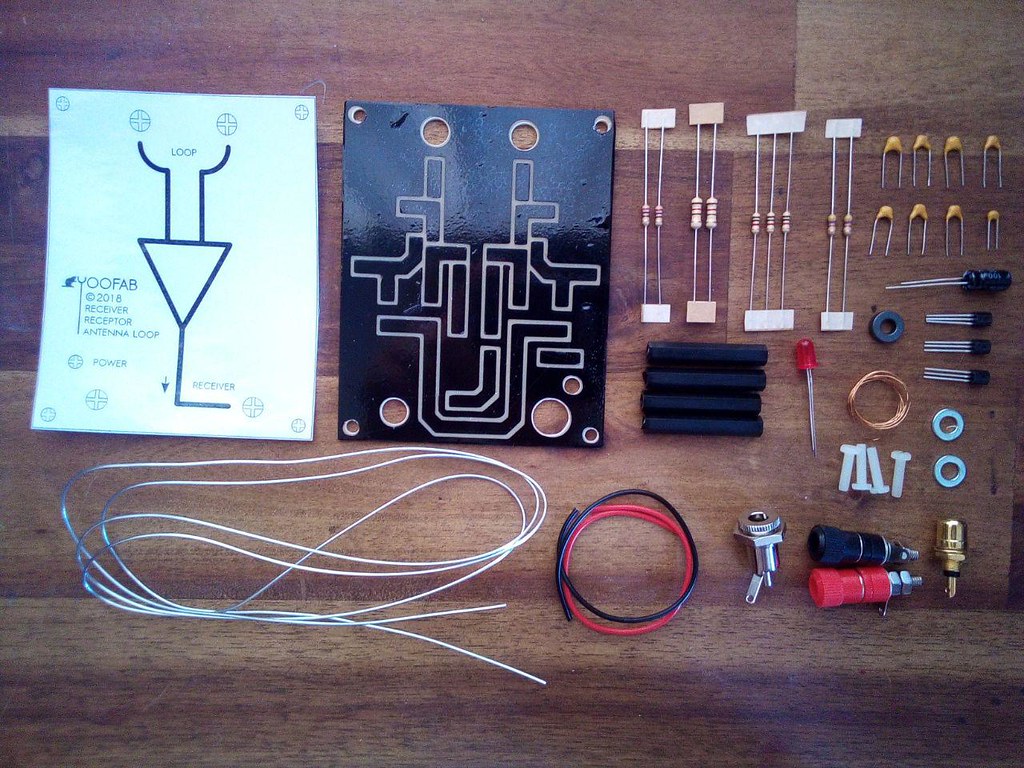 The color / style of some hardware components like pins or connectors may vary.

Warning: there are 3 transistors on the picture. 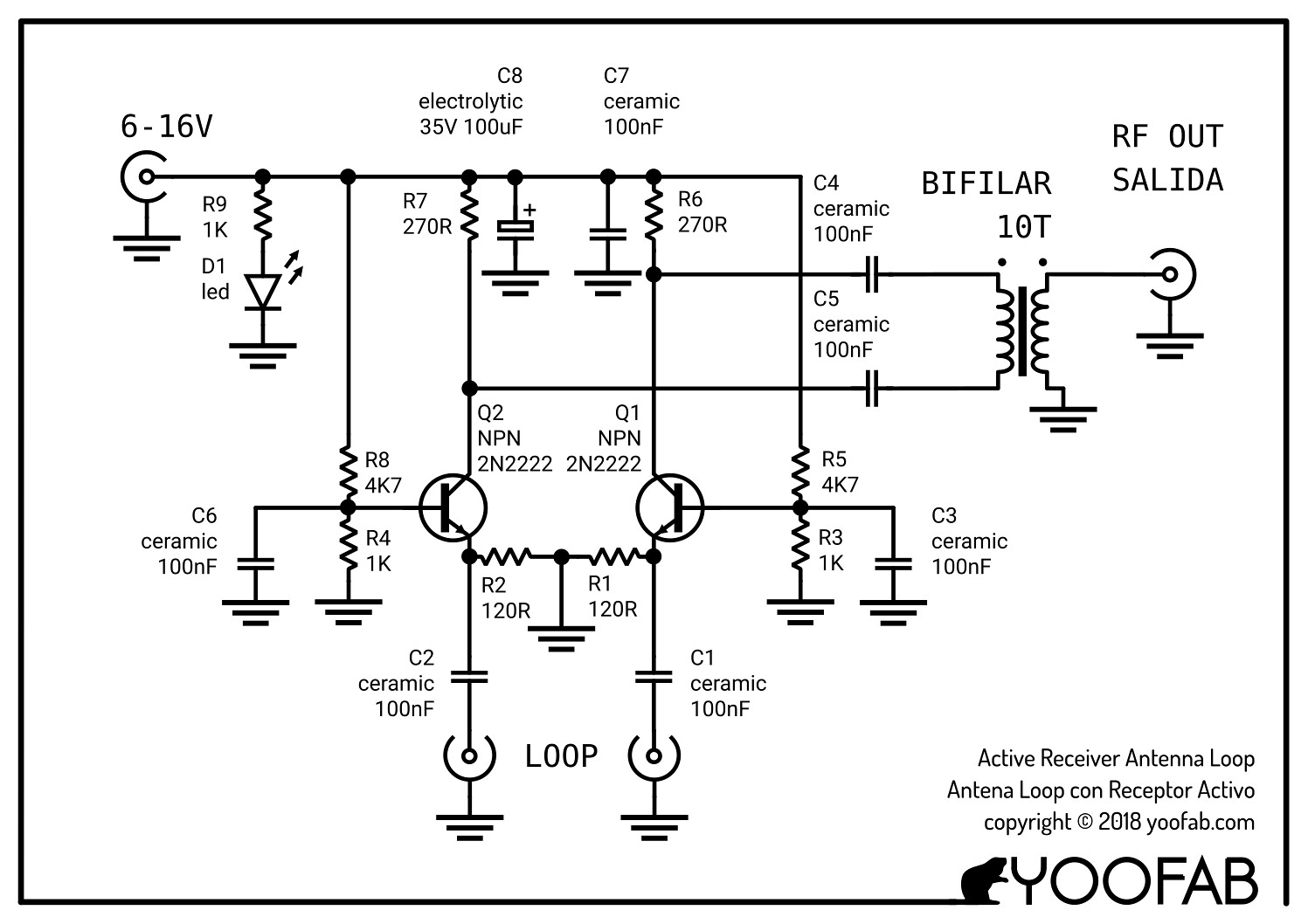 Below we can see the animation of a 5uV (p-p) input signal from the wire loop. This signal is amplified because it appears to the differential amplifier's inputs, such that as one side becomes positive, the other side becomes negative. The 5uV signal appears on the left side coloured Green and on the right side coloured Blue.

Notes On Simulation Please note that in the above animated simulation, there are two 10 MΩ resistors that go to ground. These are needed by the SPICE simulation and are not needed in reality.

Compare the animated simulation shown below with the above. The first thing we notice is there is no amplified output! The blue trace shows the input signal and the orange trace shows the output.

In this simulation the signal has been injected into both differential inputs. That is, the signal appears to go negative and positive on both sides of the differential amplifier (with respect to ground) at the same time. Ergo, there is no difference and so nothing is amplified.

Remember This When Testing We must remember the differential nature of this amplifier when testing. If we forget this and connect a signal generator to both sides of the differential amplifier, then at best nothing will appear at the output. In practice the amplifier is not completely immune to common mode signals and so instead of there being no signal we should see a comparatively small signal at the output.

On both sides of the amplifier circuit, we see two NPN transistors with the bases biased at just below 2V (assuming a supply of 12V. At 6V supply, the bias is just above 1V)

Each transistor has approximately 11 mA current passing at quiescent state. This, in addition to the low impedance inputs, provides some headroom for dealing with large signals if they are present. Bear in mind that ideally we want to be able to amplify signals of 1uV or less on our wire loop. However, every signal from ELF to upper HF may arrive at the loop, and so it is that we need to allow for this probability together with the possibility of large variance in signal strength. In other words we need the amplifier to have a large dynamic range.

The output is taken from the transformer which is used to convert the balanced output to an unbalanced output suitable for feeding along 50Ω coaxial cable. Here we must note that there is a DC path to ground through the output winding of the transformer. No capacitor coupling is used as it is assumed that the input of our receiver will have a capacitor.

We may choose to add a capacitor if DC coupling is not desired. If this is done, we should keep the value at 100nF or above.

The other side of the transformer is coupled to the collector load resistors of the differential amplifier via 100nF capacitors.

If you are interested in this kit, send an email to: